Stuck In The Political Divide 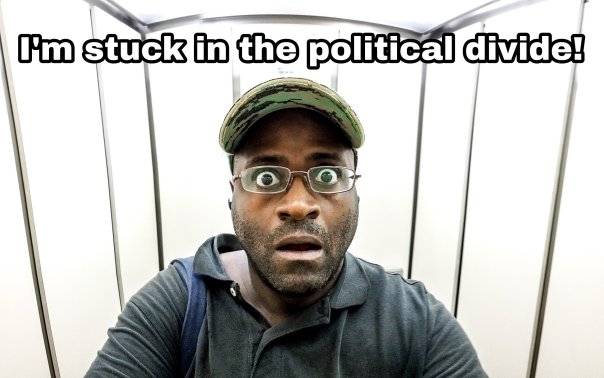 Sorry this is long!

I don’t have time for this and I have normally taken the stance to stay away from politics on Facebook. Facebook was and should be an ESCAPE from the stresses and divisions in the world. Unfortunately, it has become the fuel for such things.

Before we begin, I have some rules for dialog. Please do not play the elitist dismissal game by calling someone’s point a “straw man” or “false equivalency” or other such fallacy arguments. I think about half of the time, people who say these things just learned them and aren’t 100% sure of the contextual meaning. The other half of the time, I think they really just want to dismiss other people by throwing down a label, like a mic drop. Let’s not do that.

Please keep the hyperbole and vitriol to a minimum. We know that you’re clever and can come up with all kinds of names for those who don’t agree with. Let’s just assume that if you know me, you must be super witty and sharp. No need to litter a dialog trying to prove it. It usually has the opposite effect anyway.

Not “rules” but other things I appreciate. Ask someone a sincere question if your perception of their perspective is negative. They might surprise you, in the follow up.

OK…here goes. Buckle up and don’t throw pitchforks! 😉 I’m writing this live with no prep, so there WILL be typos and there WILL be things that I could have said better. Like I said, please ask questions before you go into auto-demonizing mode.

I have tended to avoid political discourse on Facebook, most because there is no political discourse on Facebook. It’s really just become a contest of who can be most outraged and enraged while daring others to outdo the last. While no one seems to change their mind after being called a Nazi or a Snowflake or any assortment of name calling that Facebook Fake-tivists throw at people in an attempt to shame them into submission, there IS an effect happening. A recent Rasmussen poll showed that 31% of those polled think that a 2nd Civil War is coming. (Source: https://www.usatoday.com/story/news/politics/onpolitics/2018/06/27/civil-war-likely-voters-say-rasmussen-poll/740731002/)

I don’t think that we will have an actual civil war, but it says to me that people think the divide has become a gulf that will take a massive effort to fill in or bridge. People are losing optimism and are surrendering to helplessness. We aren’t helping. People are afraid to speak out for fear of being attacked and losing friends and family if they say the wrong thing. We should be allowed to think out loud and think through things without having insult and threats hurled at us. When we do that, one can make logical points and sway the conversation and perhaps plant seeds in someone’s mind. At the very least, dialog is open. Yes, contrary to Nazi memes, civility can be effective. It doesn’t matter what “they” do. People yell at me all of the time and I normally respond with lower volume and higher logic.

In this environment, labels get applied with insufficient data. My conservative friends think I’m liberal and my liberal friends think I’m conservative. That can happen in an moment – any moment of disagreement, can turn you from ally to enemy. John McCain has this happen to him in back and forth fashion. He has been simultaneously a “hero” and “no maverick” to both sides of the partisan divide depending on his position of the day. To me, that makes him a true independent. No free-thinking human being can 100% agree with everything that another person or party deems correct.

That brings me to the hysteria of the retirement of Justice Kennedy. Justice Kennedy was a Ronald Reagan appointment who is no liberal. He voted with the conservative majority in 15 or 20 of the most recent close cases. Of all justices on the bench, he agree with Trump nominated Gorsuch more than any other justice. (Source: https://www.washingtonpost.com/graphics/2018/politics/supreme-court-2017-term/) Kennedy has also been called an inconsistent voice on the hot button issue of abortion. He has sided with both sides at various times.

So, I don’t understand the meltdown on Facebook. Kennedy announces retirement and more than one Facebook post referred to it as the realization of The Handmades Tale. I won’t out those sources, so you’ll have to trust me on that. This was before any lists or names were made public. This was simply a reaction to a retirement and to the cult of personality that will be empowered to replace the retiree. It’s the tantrum of perceived hopelessness again.

People forget that the Senate is 51-49. That’s not a huge majority and there are 2 GOP Senators who are abortion rights proponents. Add to that, that there are some Senators up for re-election and will not want to have to defend voting for someone who is off the charts. Then there are even more GOP representatives who, while not involved directly in the SCOTUS process, will apply pressure if their seat is hotly contested.

Remember…Reagan nominated Kennedy. Granted the opposition party was in control of the Senate and his first 2 nominations fizzled. Pressure is pressure and Trump needs this victory as much as Reagan did. I hope they find someone who cares about the Constitution more than an agenda. That is always my hope, but I’m finding that presidents nominate those who have similar agendas to them. That is supposed to be checked partially by the Senate confirmation and that happens quite a bit. It might happen here. The point is that things aren’t as simple as the social media meltdown by people who are assured that they won’t get their way. I may or may not get my way, but the confirmation hearings are about people asking questions, which is something that I’m a fan of.

I am a proponent of civility and discourse. People will post about Jews being asked to be civil with the Nazi’s. Then if you comment that with examples of civility working, the response is always a weakly applied “false equivalency” argument. I got hit with a made up “whatabout-ism” charge the other day. It’s as if a crazy statement stands because it was said first. Any attempt to respond to it, has some faux-intellectual dismissal tactic employed. The reality is that the perfectly imperfect storm of the Nazi takeover in Germany doesn’t exist here. Our form of government is different. The popularity and charisma of leadership is different. The exposure levels of every action is different. One can’t be accused of a response that bears false equivalency, when the original charge itself lacks equivalency.

At my American Legion post, we have a “no politics” rule, which I’m sure has prevented many a fight. There are still vitriolic exchanges on Facebook between members, but it tends to stay there and one will usually point out that the other is ignoring the person, whom they know is a good person, in favor of an agenda. Recall that no one has said that verbally violent communication of those agendas have proven to be effective in advancing that agenda. I would venture that my oft-attacked style of not attacking has lead more people think about what they think, than any Faketivist who hurls insults and shuts people down with dismissals over a logical argument.

As a country, if not as global humanity, we are at a precarious point, and I think furthering the divide will equal catastrophe. Some of you disagree, I’m sure. I am of the opinion, that opening-up conversation and not falling prey to “civility” becoming a bad word, can afford the opportunities for people to positively affect others. The most effective disarming is to make the enemy see you as a human being. The most effective way to have someone consider your perspective is to treat them as a human being, especially when you feel that they aren’t treating you as a human being. I could list many a #FaithInHumanity example, but the naysayers will just pick them apart with some false equivalent straw-man reaction because it doesn’t fit the agenda.

Phew, that was long, and to anyone who made it all the way through, I thank you and hope that even in disagreement, you’ve found something here that you can respect in my way of thinking and approaching problems. If I stray away from politics on Facebook, it is not because I have my head in the sand; It is because Facebook is not my ideal venue for such discussions. I get annoyed with the memes and the name calling that most of you would never do to my face and if you did, I’d have one less real-life friend to worry about.

You are all my people and I hope I don’t have to wait for a bridge to be built across a political divide, to keep you.
If you made it this far and want to comment, please start it with a braggy sounding “I’ve earned my perspective here” 😊

Posted on June 28, 2018, in Uncategorized. Bookmark the permalink. Leave a comment.